We regret to inform you of the passing of John Oliver.

We thank you John for your service to our lake and community.  Rest in Peace. 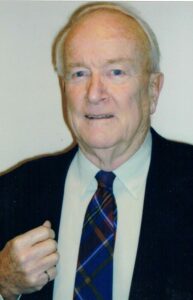 John is survived by his lovely and devoted wife Susan (nee Marshall), whom he ‘fell for at first glance’ at the Grant Hall Tea Dance in 1953, (the day after Hurricane Hazel).   Missed by his treasured children David (& Leslee) of Kingston, Christy (Bruce Howell), Marni (Pierre Sirois) and Pam of Ottawa.  Proud, loving and enthusiastic Grandpa of Spencer, Morgan and Warren Oliver, Dana Sci ‘15, Madeline Sc ‘16 and Simon Sc ‘19 Howell, Xander Sc ‘21, Jacqueline and Julian Sirois and Mick Pratt. Also survived by his caring sister Ada Scott, sisters-in-law Christy Korhonnen (Robert), and Norah MacKenzie and many nieces and nephews. Predeceased by his brother Hugh and brother-in-laws David Scott and Noel Marshall.

John was a graduate of his beloved Queen’s University (Sc ‘56) and enjoyed an active and rewarding career as a professional Engineer.  This included work on Queen’s West Campus, Millhaven Penitentiary, Port aux Basque Ferry Terminal, and many projects in Ottawa and Iqaluit, culminating with the Nunavut Legislative Assembly.  He was co-founder and president of Oliver, Mangione, McCalla & Associates and involved in many voluntary pursuits.  He is past president of the Ottawa Chapter of the Canadian Society of Civil Engineers, Queen’s University Alumni Association (Grunnan Onarach 2006), Vice President of the Association of Consulting Engineers of Canada (Beaubien Award 1990), Fellow of the Engineering Institute of Canada, past president of the Christie Lake Association, founding member of Maple Association Inc. (lakeshore nursery), and past president of The Country Club (Club Champetre). He was honored to serve as Chief Warden, Camp 12 Ritual of the Calling of an Engineer and at All Saints Anglican Church Westboro.

As a young knight he favoured two-wheeled steeds of the AJS and Triumph liveries. The gallant gentleman John enjoyed skiing, sailing, tennis, and dinners with his good friends.  He was a gifted raconteur, weaving fact and fable for amusement of the beguiled.  An intrepid bargain hunter, he seldom returned empty handed, excited and generous as he distributed the loot.  The cottage at Christie Lake was his haven and where he was happiest with all hands on deck, heartily encouraging the participation of family and friends in all-inclusive breakfasts, orchestrated tasks, and recreational opportunities, all in camp-director style – “Rise & shine!” “Come on people, don’t just stand there sucking your teeth…get cracking”.

John worked hard and loved life.  Good cheer and consideration for others were his touchstones.  His family were blessed to be subjects in his benevolent realm.  And no one ever doubted the great love he had for his wife Sue.  Fare thee well captain, the ship is waiting and the winds are high.

A visitation will be held on Thursday October 7, from 4:30-7:00pm followed by a funeral service on Friday October 8, at 2:00 pm at Tubman Funeral Homes, Garden Chapel, 3440 Richmond Road, Nepean (between Bayshore and Baseline Road). Due to COVID regulations, registration to attend is mandatory and may be made at https://www.tubmanfuneralhomes.com/obituary/John-Oliver or by calling 613-722-6559.

Donations to the Christie Lake Camp are encouraged in lieu of flowers. Tributes, condolences and donations may be made at https://www.tubmanfuneralhomes.com/obituary/John-Oliver